Sometimes you just never know what will happen.

I love to attend the ISGB Gathering.  It is such a wonderful full three days just crammed with beadmaking.  Demos, displays, vendors, open torch, contests, auctions.  And, the people - lampworkers everywhere.  Who could ask for anything more.

I have been participating in many of the fund raising activities.  I love the ISGB and all that it stands for.  This year I was honoured to be asked to contribute a piece to the live auction, I had a piece in the silent auction and I created this little birdie for the Trifecta Beaded Object Contest. 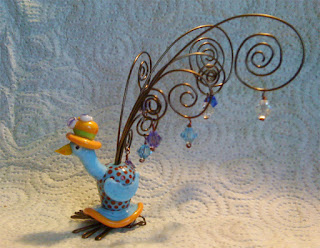 Every year there is a beaded object contest at Gathering.  I have contributed pieces in the past.  It is always fun to make something out of the ordinary.  This year it was entitled "Trifecta" in honour of us being in Louisville, Kentucky.  The three themes that we were supposed to consider were: Baseball, Horses, and Fancy Hats.  I think they wear these fancy hats to the horse races, though I have not had the pleasure of attending a horse race in Louisville.

Once I did attend the horse races in Mexico City.  That was many, many years ago - I spoke very little spanish - well none really and was staying with a family.  The rebel older brother took me to the races - I think he was wagering some money - I was all of 17 years old.  What I remember best is that the race track was so beautiful.  I certainly do not recall any fancy hats, though there was this very fancy dude that rebel older brother was very intent on talking to.  I have alwasy wondered just what was going on.  But, I will never know.  Anyhow, I digress.

The deal with the Trifecta is that you purchase tickets and put them in the box (this year it was little bags) for the one you like.  A random drawing is made of the tickets and one person is the winner of that beaded object.  There is another side too - the top three pieces that receive the most tickets win prizes for their creators.

My little birdie had the most tickets!  She came in first and would you believe, I won this:

You just never know when you make something what will happen.  I never would have believed it if you would have told me in the spring that that little birdie would be everyone's favorite bead.  Thanks so much to everyone who voted for her.  She has a good home with the lucky winner.  All beads need good homes, don't you know - especially ones with faces!