Trying my hand at Toucans

I would like to introduce you to Hector.  He currently resides in my studio.  My studio is very small.  He is hanging from the ceiling directly behind me.  Originally he was found in St. Thomas on a shopping expedition many, many years ago.  I just had to have him. 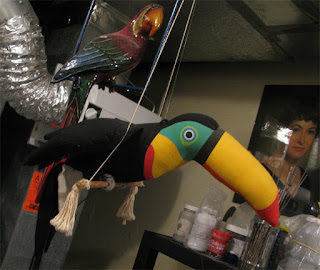 (You can see a charcoal drawing of my grandmother in the background)
Hector graciously agreed to be my model recently as I was ready to try my hand at toucans.
It was a wee bit difficult as he is behind me, but I used his colouring and dove in. 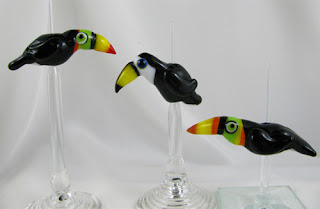 I think the very first toucan is the one on the far right.  Then the second one is the one on the far left.  I thought they were pretty cute, but decided that perhaps Hector was not the best model.  Either for his colouring and makeup and also his location.  So, I hit the internet and found a whole bunch of photos.  I printed these out and gingerly place the piece of paper on my studio desk. 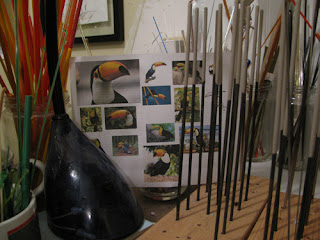 I absolutly love the biggest picture.  That bird just looks like he has something to say.

So, the very next toucan created was the middle one in the above photo.  He is a bit buzzardy in his shape.  But I was determined.  I am fascinated by their colouring.  Just love the black tips of their beaks.

Once when I was a teenager, we happened to be in a local pet shop.  They had a toucan for sale.  He was $1,000.  I distinctly remeber that I actually had that much money in the bank - that was Everything I had - but I seriously considered if I should buy him.  He was just a youngster and in hind sight I am sure it is a very good thing that I just left him at the pet shop - first of all my Mom would have killed me! Second of all, there would have been the cost of a cage and food, the vet, etc. etc.  None of which I could possibly afford.  But, still I do love these birds.  We used to have a zoo membership and I would always go and visit the one they had there. 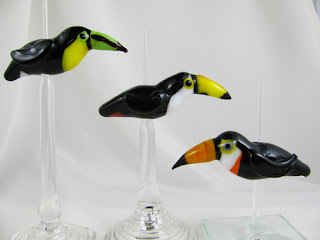 These are the second set of toucans.  I am improving.  No hats for these birds - seems sacreligious or something!  I have started to try them in funky colours.  We shall see what happens next time I get some studio time!
Posted by Amy Waldman-Smith at 8:34 PM