I received the official announcement on June 19th!  Number 11.
Would you believe I was not at home when I received the email.  I had no idea which one that was!
I was intensely curious - which one was 11 - all I could initially determine was that it had to be a round bead, the bicones where all at the end of the list.
Then I realized that I had access to a copy of the letter sent to Bead and Button.  This told me a little more - Ottoman Layered Bead in Purple.
I was pretty sure I knew what it looked like, but not exactly.  There were so many beads.
As soon as I got home I looked at my records and was thrilled with Number 11. 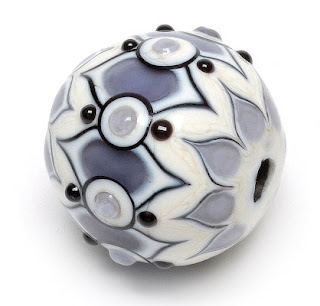 Here it is.  It had it's picture taken by a pro in Milwaukee!
It has also been renamed "Purple Lupine Ottoman Bead"

You can order one here.

I really did not expect to hear so soon.  I was anticipating starting in September.  I have been quite busy.  Had a small holiday to Manitoulin Island.  Spent a week at The Studio of the Corning Museum of Glass studying with Wesley Fleming and then headed to Rochester for the ISGB annual Gathering.

But I have been working away as much as I could.  As of today I have made 22 beads!

My strategy for creating so many of the very same bead is to listen to books on tape and just get into the meditative-ness of creating.  So far so good.  Working my way through one of my favourite books - I think I have read it at least three times - but it is fun to listen to again - Clan of the Cave Bear!

Any gripping books that you can recommend would be appreciated.
Posted by Amy Waldman-Smith at 10:50 PM