Back from Gathering in Rochester

I could probably go on and on about what a good time I had at the ISGB (International Society of Glass Beadmakers) Annual Gathering that was held this year in Rochester. I have been able to attend the last 3 out of 4 Gatherings and I have had an amazing time each and every year I have attended. It is basically a jam-packed 3 1/2 day conference. You can stretch it out longer if you take some classes, but this year I pared it down to the bare minimum and drove down on Thursday evening.

We started the event with a reception at the George Eastman house - WOW! is all I can say. I was so very sorry that I did not have my camera in my purse. I almost turned my phone back on to use it's little camera, but I had vowed to keep the telephone off to save money.

Turns out that keeping the telephone off and using the hotel phone for the 4 or 5 calls I made was a poor decision on my part. More research was needed and, I expect many of you know this, but using that telephone in your room in the hotel is like throwing money right out the window! Never again! I will suck it up and pay my cell phone provider their roaming charges and data packages and at least know what I am getting into - the hotel managed to surprise me with a $90 bill for those measly 5 phone calls.

This guy was hanging out in front of our hotel room window. I was intrigued - just who is he? Peter Pan? Nope - he is M 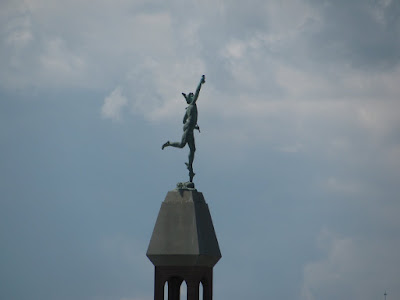 ercury. He was unveiled in Rochester on January 29, 1881. He was designed by J. Guernsey Mitchell who was commissioned to build the statue by brother-in-law William S. Kimball. Kimball wanted the statue to grace the chimney of his new tobacco factory. The statue remained up until 1951 when the building it was on was demolished. Mercury was put in storage for a period of 23 years, but he was put out once again. He really is adorable standing out there reaching for the stars.

Speaking of reaching for the stars, I collaborated recently with Heather Taylor to enter a piece in an ISGB show called Covergence II. The idea was to create some fantastic piece of jewellery that would / could be worn by an real or imagined person. Our piece is entitled Poetical Science for Ada. The piece was designed for Ada Byron (Lady Lovelace). Ada was the daughter of the poet, Lord Byron. She was a poet and a mat 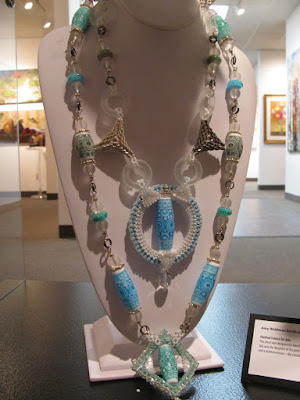 hematician – she considered herself a “poetical scientist”. The piece made it into the show. Currently, the pieces are being shown in Rochester at the Nan Miller Gallery until August 21, 2010. On Friday evening at Gathering I took the Gallery Tour and attended the Nan Miller Gallery and a couple of other galleries. It was great fun to see all the pieces and especially exciting to see mine again. We are in very good company and the pieces will travel around the US for a whole year, ending up at the Bead and Button Show in June 2011. I have every intention of visiting with her again in Milwaukee - in fact I have sent off proposals to teach there again.

All day Friday and all day Sunday of Gathering is spent watching demos and lectures on many bead related topics. This year's theme (though by accident I am sure) was insects. Teeny, tiny off mandrel insects. I was enthralled to watch Wes Fleming and Michael Mangifico work. Wow! is all I can say. I tried some fairy wings, but they are not good enough to photograph. It is very difficult to work tiny like that with soft glass.

Saturday of Gathering is a great big bead fair. We had the best time and this year I even took half a table!

I am already looking forward to attending next year's Gathering in Louisville, Kentucky.
Posted by Amy Waldman-Smith at 9:45 PM