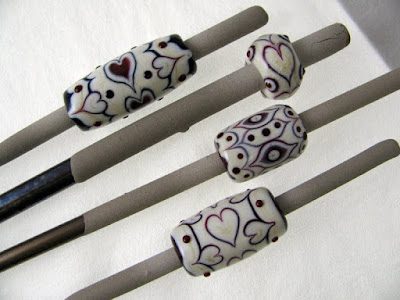 This is what the kiln fairy had for me today! I have been on a big hole bead kick for the last couple of days. Today I focused mainly on heart shapes. I really had a lot of fun.

I took a Viking Knit class at Bead and Button with Anne Mitchell. I came home all geared up to make a necklace and after a convo on Etsy it came to me . . . I could make the Ottoman beads with big holes! Wow! That certainly simplified a whole bunch of issues re: attaching them, keeping the two pieces the same size, etc. I am also trying to make some smaller large hole Ottoman style beads with bracelets in mind. There is one up on the Etsy site and the little one here (the heartless one) will likely get up on Etsy in the next few days as well. 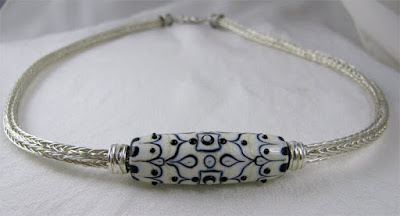 Here is a picture of the finished necklace. It turned out so beautifully! I had to get my dear hubby to help with the pulling - he wanted credit - so I have officially named him my Viking Puller! I am sure he is thrilled! But truly, I do not have the strength to do that pulling by myself. The beautiful rosewood thing with the holes (I am sure there is a proper name) is designed to be put into a vice, but that would mean a trip out to the garage and fighting with the vice - assuming there actually is one attached to the tool table out there (though I am pretty sure there is one). Asking the hubby was ever so much easier. My daughter was also suitably impressed. She had helped a bit with the stitching and I think she was wondering what I was up to as it was not so impressive before the magical pullling happened. It is quite addictive. I am already planning on the next one!
Posted by Amy Waldman-Smith at 7:49 PM